Radia is an international network of radio stations and initiatives with an interest in radio art. Their individual approach to radio art is expressed in weekly shows that are shared across the network.   The invitation by Kunstradio to produce a series of shows raised the question of a common denominator that could tie the pieces together. It was suggested to hold a production meeting for Radia artists to share the initial impulse for the creation of the shows.   As a location for this meeting Radia managed to secure one of the most imposing exhibition spaces in Europe, the Gasometer in Oberhausen.

In the middle of July, just as most of Europe was sweltering under temperatures of 36°C, eight intrepid radio makers made their way by air, train and car to Oberhausen, Germany, to take part in a radio art camp. Our final destination was the 117 metre high gasometer, our task, to use the site, both inside and out, as an impulse for five radio programmes that will be broadcast on Kunstradio from 17th October onwards.  Our time there was short, but intense. We spent two nights and one day in and around the giant steel cylinder and began to incubate our ideas which were subsequently finalised in their own studios. The ideas the gasometer generated were many and varied and ranged from a dialogue that stretched over 100 metres, recordings of people gasping up the 800 step outside staircase, which were then reinjected back into the space, to balloon pops, megaphone screams, feedback loops, and a bouncy ball concert. Radio art is, in this instance, a function of space. 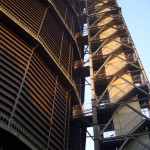 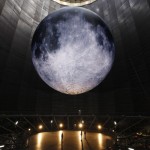 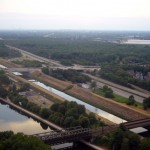