A sound collage first performed at the Sonors Festival, Nantes (2010) and inspired by an archive of radio programme scripts.

One of the first things I learnt when I started making features for Radio France International’s English Service was the importance of a good script, a series of instructions for you and the studio manager that explain how you want the final programme to sound, when and what music should be played where, the recording of spoken links that inform the listener of what they are about to hear, or have just heard. Once you have made the programme the script generally ends up in the bin. I had often heard tell about my friend and legendary journalist, concert organiser, musicologist and radio producer Daniel Caux’s meticulous scripts, or conducteurs as they are called in French. Nothing was left to chance. Drawn up with a pencil and ruler on squared paper he pre-planned puffs on cigarettes, pauses to take breath, warned the studio manager that he might rustle his papers, and converted time into the pieces of feed tape that were spliced between tracks.  Rereading a radio programme script is a bit like snooping into someone’s diary. It is not done. I wanted to give these scripts a new voice, to suspend the meaning of these words and instructions, and use them as an inspiration for another, all together different, radio programme. Using these unique conducteurs as a visual score and text,  I gave them to a group of people who have no formal radio training including a sound artist, a poet and a musician,  and asked them to choose an extract to read, or interpret, as they wish.  My thanks to all who participated :  Michel Risse, Hervé Binet, Alice Hui-Sheng Chang, Caroline Bouissou, Valérie Vivancos, Frédéric Dumond, Jean-Philippe Renoult, Eléonore de Lavandeyra Schöffer and to Jacqueline Caux for allowing me and encouraging me to reapproriate these conducteurs. (DinahBird, 2010)
Bruits de Papiers was awarded a grant from the Fond d’aides à l’Ecriture Radiophonique and the RTBF, Belgian Public Radio.

You can listen to some extracts on my soundcloud : 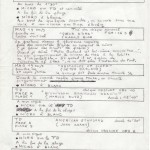 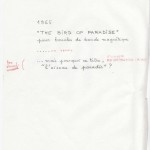