Home / Other Sounds / The Eighth Wonder

To mark the installation of Nicholas Monro’s King Kong sculpture as part of the Henry Moore Institute’s City Sculpture Projects 1972 exhibition, Alan Dunn invited us to take part in the working of a new score, The Eight Wonder, for the 1933 version of King Kong.

Alan says of the new soundwork :  I always wanted to work with the 1933 King Kong soundtrack. I begin by REMOVing all the dialogue except for the one word that appears three times – “LISTEN.” From the original two hours, I am left with exactly sixty-minutes of sound effects and some of Max Steiner’s score. I divide this up into the thirty sections listed below. I invite people to select one to tamper with, to create new foregrounds for or to remove elements from. I re-assemble the thirty treatments received from across the globe for first hearing here at &model.

The Eighth Wonder is a collaboration between Alan Dunn, artists, writers, musicians and students from the sculpture’s original home – Birmingham – and new temporary home in Leeds. It was made for the The King & I exhibition at &model (26 January 2017 – 19 February 2017) 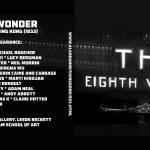 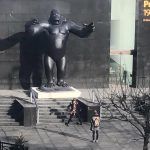