I Could Never Make That Music Again is a sound collage crafted out of interviews that Jean-Yves Leloup (L) and Jean-Philippe Renoult (R) collected from artists, musicians, DJs and electronics sound makers.

Even though most of the people interviewed here have just met on a few occasions, they have all participated in the making of the history of electronic music; from the early tape experiments in the 1950s to the latest trends in techno. Derrick May and Stacey Pullen, pioneers of Detroit techno, reply to an audio letter recorded in 1966 at the Phillips research laboratory in Holland by Fred Judd talking to a certain Tom Dissevelt about the lack of commercial interest in electronic music. Thirty five years on the musicians of today air their thoughts on the subject. Steve Reich and The Residents swap anecdotes, DJ Shadow chats to Coldcut, Rioji Ikeda to Richie Hawtin. Autechre reflect on the beauty of machines, A Guy called Gerald ponders on the cosmic realms of sound, Aphex Twin remembers his dreams, and Mad Mike from Underground Resistance marvels at the forces of Nature.

(listen an extract below)

I Could Never Make That Music Again received the ‘prix du jury’ at the Qwartz Electronic Music Awards 2008. 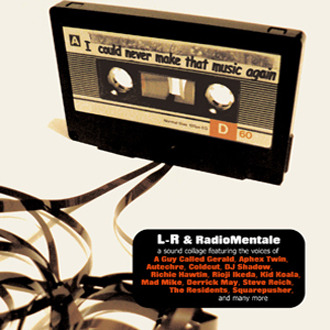